Turning research into commerce in a down market

What happens when an industry that fuels explosive growth collapses? That depends on the ability of the marketplace to adapt and change course.

Stalled at a crossroads and facing strong economic headwinds, Calgary needs innovation and entrepreneurship to energize the city, say experts.

As the oil industry struggles to get its product to market, jurisdictional issues are sparking battles across the country, from Vancouver to Montreal. All roads that crisscross Canada’s major municipalities seem to lead to one powerful and polarizing issue – the environment.

And yet while provinces, municipalities and the federal government seek new ways to power the appliances we use daily, for everything from heating our homes to cooling our fridges, oil remains the engine that drives much of the national economy.

The problem is complex – how do we pivot on current technologies while encouraging new ones to fuel our cities and communities in the future? The answer may lie with the person working on their laptop in a coffee shop as much as it does in downtown boardrooms.

Research is the fuel that feeds idea generation, which in turn unlocks solutions. The people that fuse bold ideas with daring, workable ventures are more and more turning to environments that encourage them to thrive. These days, the person on their laptop in the coffee shop may well turn to the university as fertile ground for growing the next big thing.

Recession: The mother of innovation

“People are more likely to look for opportunities if their backs are against the wall,” says Dr. Jim Dewald, PhD, Dean of the Haskayne School of Business at the University of Calgary, an entrepreneur who has weathered ups and downs in the city for most of his life. “The situation creates a sense of urgency and a need to generate new growth ideas as quickly as possible.”

"People are more likely to look for opportunities if their backs are against the wall."

Writing in the Financial Post in September, columnist Rick Spence suggested entrepreneurs are proving to be among the country’s greatest assets. “If you’re looking for Canada’s most valuable resource, you won’t find it in the ground or undersea. Rather, it’s the growing cohort of successful tech entrepreneurs who have figured out how to create massive value.”

Can new energy technologies emerge from the sizeable talent pool in Calgary? There is no magic wand, but bright spots on the horizon, powered by University of Calgary expertise and funds, suggest change is coming – like it or not.

Early in September, for example, the federal government pumped $75 million into a University of Calgary project designed to reduce the effects of energy extraction – one of 13 projects announced across the country with funding from the Canada First Research Excellence Fund.

Now is a time of prolonged technological disruption that will provide opportunity or misfortune, depending on your skills, appetite for change and ability to roll with circumstances not entirely in your control.

So where do you go for help and guidance if you’re an entrepreneur, particularly one with an interest in new technologies?

"Whenever there is a downturn in the economy there is a real opportunity."

Consider Innovate Calgary, an initiative where the University of Calgary, the City of Calgary and the Calgary Chamber of Commerce unleash the combined powers of researchers, startups, entrepreneurs, investors, industry and partners. It’s a full-service organization that offers technology transfer and business incubator services in the advanced technology sector.

Aside from mentoring and providing legal and other services to help startups and entrepreneurs gain traction, there are powerful aids such as the Innovator’s Toolkit.

“Whenever there is a downturn in the economy there is a real opportunity to drive innovation, develop new products and new technologies and get them into the marketplace,” says Innovate President Peter Garrett (BSc EE ’80). “UCalgary is the fuel for that innovation pipeline. There are a lot of interesting technologies in the university that have commercial potential and now we have receptor capacity to take that to market.”

The startup uses an innovative concept for the capture and conversion of carbon dioxide (CO2) into biomass for the production of clean and renewable energy.

“We’re academics so we’re trying to get more people on board with a business mindset who will help take the business forward,” says team member Christine Sharp. “Innovate Calgary is very involved with helping us to find financing. The Innovator’s Toolkit is very helpful to look at market analysis and business ideas.”

While Solar Biocells is in the early stages of growth, Sharp says that in theory, the innovation could even be used in the future to power cities.

While the federal and provincial governments are focused on economic diversification, most funding schemes aren’t set up for funding research on new, unproven technologies and innovation, says Sharp. “So for the past two years we’ve been funded by the University of Calgary VPR Seed Grant ($ 70,000/year spent) and the Campus Alberta Innovation Chair (CAIP) in Energy Bioengineering ($ 200,000/year spent).”

Meanwhile, Sharp and her Solar Biocells teammates are giving back by supporting community learning. Armed with the company's work, she’s been visiting schools and educating elementary and secondary school students on the science. She’s participated in Telus Spark Energy Series and has been involved in a Women In Science discussion group.

The process of city-building involves building bridges with relationships into the broader community as much as it does constructing downtown office towers.

Bryce Tingle, who holds the N. Murray Edwards Chair in Business Law at the University of Calgary and has authored Start Up and Growth Companies, A Guide to Legal and Business Practice, says students have the opportunity to explore the problems that startup companies encounter by examining arising legal issues.

“It’s a win-win,” says Tingle. “We spend time in class talking about the issues, and the startup company can consider good-quality drafts of agreements that they can then turn around and give to their lawyer to work on.”

Krol walks the entrepreneurial talk, having worked previously at Innovate Calgary as a manager of company creation. He’s familiar with how entrepreneurs can gain traction on the reach from university research into business and community.

“I consider oil and gas to be part of the tech sector," says Krol. "Alberta is a leader in developing new and innovative technologies to solve industry challenges in drilling and completions. In today’s market, those same innovators could transition expertise to other industries.”

“The pioneering spirit is still alive and this attitude prevails throughout the community,” says Dewald. “Oil and gas has given us one of the most powerful collections of engineering talent in the world, but we can lose people if we don’t come up with new ideas and employ them in effective ways.”

When the economic backbone breaks

Dewald, who has written extensively about storm clouds and silver linings in his research, sees opportunities in the downturn. How communities turn their existing capabilities into new entrepreneurial ventures can yield clues for diversifying a city’s economic base while ensuring sustainable development.

Haskayne School of Business associate professor Dr. Seok-Woo Kwon, PhD, an expert on social capital and the intersection of entrepreneurship and urbanism, says a tale of two cities – Baltimore and Pittsburgh – informs transformation in the face of economic peril.

"The question relevant for us is why some cities never recover from a loss of major industrial base while others do."

Baltimore and Pittsburgh were thriving cities relying on manufacturing factory jobs during the first half of the 20th century, says Kwon, referencing an article that ran last year in the Wall Street Journal, titled Pittsburgh’s Revival Lesson for Baltimore. The two cities’ economic fates diverged radically during the second half of the 20th century.

Baltimore’s population has fallen by 35% since 1950 and its median household income is 44% lower than the state average. On the other hand, says Kwon, Pittsburgh found a way to recover from the loss of the manufacturing sector by diversifying into advanced metal alloys and surgical implants. In 2009, Pittsburgh was selected to host the annual G-20 summit and hailed as “a model for economic, environmental, and quality-of-life transformation.”

“The question relevant for us is why some cities never recover from a loss of major industrial base while others do,” says Kwon. “The answers would probably vary depending on who you talk to. One explanation suggests that cities diversifying their economic bases tend to have more sustainable development.”

While Pittsburgh had too many of its eggs in the steel basket in the early years, steel production has successfully transitioned into an industry of specialty metals and alloys, Kwon says. The city was able to nurture booming technology and healthcare industries and is working to groom film industry and music scenes.

Similarly, Calgary is branching out with the National Music Centre in the emerging East Village and the new state-of-the-art, $28.2-million Calgary film studio developed by Calgary Economic Development.

A rendering of the National Music Centre in Calgary.

“Another explanation might lie in the social and cultural fabric of the city or the community,” says Kwon. “In our own research that was published in America Sociological Review, we found that entrepreneurship is higher in a community where people trust each other and join civic activities for the community.”

A city that builds a diversified economy cannot do so in a community where members do not share common cultural and social fabric, says Kwon. “After all, economic prosperity goes together with a strong community.”

In Calgary, the bridges built from university to businesses to the broader community comprise a network – a widening infrastructure of entrepreneurial spirit.

"Entrepreneurship is higher in a community where people trust each other."

As well as Innovate Calgary, the University of Calgary has Haskayne’s Hunter Centre for Entrepreneurship and Innovation, which encourages the growth of new business and student engagement with a summer incubator program, global entrepreneurship week and the Wayne Henuset Entrepreneurship Speaker Series.

On the one hand, Calgary is comprised of mavericks, while on the other, the city centre is home to office towers housing corporations. It’s a yin-and-yang dynamic that, at its best, powers imagination while enabling growth.

Entrepreneurship is higher in communities where people trust each other.

“Calgary is a city that has grown with entrepreneurial spirit in its DNA,” says Dewald, whose most recent book is titled Achieving Longevity: How Great Firms Prosper Through Entrepreneurial Thinking. “This is a time when we should be seeing renewed focus on entrepreneurial ventures.”

The city’s proud history of entrepreneurialism may be its saving grace.

“This city started with pioneers and explorers, creating an oil industry that had never existed in Canada,” Dewald says. “There’s a real sense of ‘we can do this’ that makes Calgary unique. You can’t get more entrepreneurial than that.”

Dr. Jim Dewald is the dean of the Haskayne School of Business and an associate professor of Strategy and Entrepreneurship. See a list of Jim Dewald's publications

Bryce C. Tingle holds the N. Murray Edwards Chair in Jurisdiction and Business Law with the University of Calgary’s Faculty of Law. He is a member of the founding teams for several companies active in the technology, energy and financial industries. He also advises several private and public companies. View a list of Bryce Tingle's publications 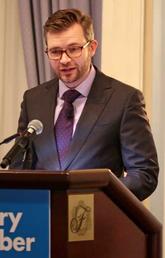 Q & A with Calgary Chamber of Commerce President Adam Legge

How do you rebuild after you've lost everything?