Like the time when Prohibition was repealed, legalization of cannabis means a brand-new (formerly illegal) sector is about to be born. UCalgary researchers look at what shape such a newly legitimate industry might take.

An IPO market cap estimated at 1.5 billion. Stock jumps for coffee shops converting to cannabis lounges. A rock band partners with a producer. The business pages are full of news about cannabis as recreational cannabis becomes legal in Canada and instantly creates a new industry with a long history.

Cannabis has been bought and sold for thousands of years. In Canada, it was declared illegal in 1923, a year after Alberta activist Emily Murphy published a book suggesting marijuana could turn people into homicidal maniacs. Decades later, in 2000, Ottawa legalized growing cannabis for personal medicinal purposes. A few years later, the regulations shifted and only licensed producers were allowed to grow medical marijuana.

This fall, the rules of the game are changing again and thousands of entrepreneurs are getting ready to play. Some analysts suggest legal cannabis in Canada could be a $20-billion industry. That’s more than double the $9.2 billion Canadians spent on beer in 2017 and almost triple the $7 billion spent on wine across the country. Hundreds of companies have applied to the federal government for licences to grow or sell cannabis. And many more investors are putting their money down.

“You see most of the money going into the growing operations,” says Dr. Alice de Koning, PhD, a senior instructor for entrepreneurship and strategy at UCalgary's Haskayne School of Business. “There’s massive expansion, particularly here in Alberta, and incredible investment in large-scale growing operations. And the medical marijuana companies, the ones that have been growing for the medical market, are very well-positioned to expand to recreational use.”

Colourful “Coming Soon” signs are going up in more and more store windows across the country. But there’s no certainty all these cannabis outlets will survive the initial frenzy. “Like in everything in private enterprise and the free market, some will succeed and some will fail and that’s just the way it always goes,” says UCalgary alumnus Todd Hirsch (MA ’93), the chief economist at ATB Financial. “My guess is five years from now we will not see hundreds of successful retail cannabis operations.”

As bureaucrats at all three levels of government implement pages and pages of regulations about the production, sale and consumption of cannabis, entrepreneurs with skin in the game have been anxiously awaiting ‘go time.’ “Honestly it’s all a best guess right now,” says alumnus Khalid Abdul Razak (BA ’09), a former management consultant and current founder of coffeeshop, a store gearing up to sell high-end, stylish cannabis accessories. “There’s no 100 per cent proof of anything. Now we’re going to see peoples’ business strategies and whether they pan out or not.”

When cannabis businesses throw their doors open, there’s little doubt they will have customers waiting. Unlike blockchain, smartphones, or other products that burst into the marketplace out of nowhere, cannabis has an existing customer base — millions of people who already use the product (medicinally or otherwise).

“We do have a high percentage of adults using so there’s no risk there,” says de Koning. “But if you look at the number of growing operations that are planned and the investments that are in place it just seems like there is way more supply than Canada could ever absorb.”

Many entrepreneurs, however, are already thinking well beyond our borders to selling their goods and services into other jurisdictions that have or are poised to legalize marijuana. “Canada is, as we all know, the first G7 country to legalize it for adult use,” says Abdul Razak. “So we are ushering in a new era to the world. We wanted to be part of this story. It’s a huge opportunity.”

At that stage, the companies have two options: either adapt to the emerging standard or quit. “A new industry starts out like a big mess, with tons of companies entering and exiting,” she says. That mess will eventually sort itself out into a cannabis value chain, with different players offering products and services at different stages.

“What I’m looking for is the emergence of the niche products, organic or strains that are a little bit unusual,” says de Koning. “You see that in the beer market and the wine market here in Canada.” Some alcohol and pharmaceutical companies as well as some (formerly) illegal cannabis producers are joining the fray and entering the cannabis market.

“We just don’t know what it’s going to look like yet,” says Hirsch. “Will it look like a duopoly where you have two major companies that dominate the market, like a Coke and Pepsi, or will you have an oligopoly like retail grocery stores where you have somewhere between six and ten major players in the market?”

The cannabis industry offers opportunities for businesses well beyond marijuana itself. Just ask Taco Bell. The company is one of many fast food outlets seeing huge growth of late night sales in Colorado, where cannabis is already legal for recreational use. The CEO has even joked on Reddit that Taco Bell sales are up “420 per cent” (referring to 4/20, the international day to celebrate all things marijuana).

From munchies and bongs to lawyers and retail security systems, a legal cannabis market creates a number of ancillary business opportunities. Abdul Razak’s company, coffeeshop, plans to ride the initial “post-prohibition” industry churn by selling beautiful pipes, storage containers and other accessories for cannabis. “We’re aiming at the sophisticated cannabis consumer who values elevated design, meticulous craftsmanship and thoughtful functionality,” he says. “Our focus is going to be curating these products and accessories and hopefully moving into the design and creation of it as well by working with industry partners.”

Down the line, coffeeshop (named for the establishments for consuming cannabis in the Netherlands) may get into the growing business with strategic partners. But for now, the company is focusing on curating accessories and lifestyle products as well as potentially opening a flagship store in a year or so. “Just because it’s a new industry doesn’t mean we can’t adopt best practices from other industries," says Abdul Razak. "You can adopt strategies from the world of consumer products, alcohol, and tobacco. We can learn a lot of things from those industries.”

Beyond the hype, excitement and dollar signs in investors’ eyes, good old-fashioned business strategy and principles will determine who succeeds, and who doesn’t. “Cannabis is like anything, we shouldn’t be looking at it like a gold mine," says Abdul Razak. "People who get into this with the right strategy and the right operating model are going to win at the end of the day. It happened in the dot-com era, it happened in cable TV, it happened with cryptocurrencies and it’s going to happen here as well.”

As entrepreneurs across Canada get ready to launch their ventures, de Koning and colleagues at the Haskayne School of Business are planning research into the emerging industry — some with the goal of starting a business and others to better understand industry dynamics, the emergence of new business concepts and dealing with uncertain regulatory and cultural change. “There are some specific questions,” says de Koning. “Is there a contrast between the medical and recreational sides of the industry and will the distinction between value chains persist as legalization becomes more ‘normal?’”  Researchers are also interested in studying how large growing operations and small coffee shops will co-exist and how the market evolves.

But one thing is certain now — not every operation will succeed. “Some of the enthusiastic people who are getting in just aren’t skilled enough as business people,” says de Koning. “They love cannabis, they love the culture and everything around it but that doesn’t necessarily mean they can run a business successfully.”

At some point, the smoke will clear and all the speculation about the brand-new industry will turn into a list of winners and losers — and with them a long list of lessons for the next generation of entrepreneurs entering a new sector. “I can’t think of another example where there has been this kind of sudden change in the legislation that will create this new legitimate industry,” says Hirsch. “It will probably surprise people what it ends up looking like. It’s a once-in-a-lifetime opportunity to watch something like this unfold.”

Dr. Alice de Koning, PhD, is a senior instructor for entrepreneurship and strategy and Area Chair for Entrepreneurship and Innovation at UCalgary's Haskayne School of Business. Her research considers how social and institutional contexts affect entrepreneurial cognition and opportunity recognition. Alice's current projects include metaphors for entrepreneurship in public discourse, how Champagne World Fairs created entrepreneurial-driven growth in 12th century Europe, how governance structures can impact employee-driven innovations, and the impact of experiential learning methodologies. Read more about Alice

How can we turn a downturn into an opportunity? 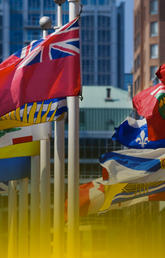